Legendary Explorer
August 2020 edited August 2020 in TomTom GO Navigation app for Android™
Today, I blindly updated the TomTom Go app without checking out this Discussion forum or even looking at screenshots. Boy, was it a foolish mistake on my part.

As an avid motorcyclist, I use both my TomTom Rider 550 and my cellular phone on my motorcycle. The overarching reason why I choose TomTom over Garmin Zumo, BMW Navigator (by Garmin) and Google Maps is the ease of getting information from a quick glance without having to strain my eyes. TomTom nailed it with the color scheme, contrast, and road name flags without requiring the driver to stare unnecessarily longer at the screen. But this new version 2.2.3? It's like a step backwards. Below is a list of usability deficiencies I observed with this new version, of which I sincerely hope TomTom developers will consider reintroducing/restoring prior functionalities.

I'm sure as I start using the new app more on the road, I will find more gripes as I try to use previously available functionalities no longer available. I'll be sure to report them. But if the above 4 items are not addressed soon in the next minor release update of the software, then I will have no choice but to stop paying for and using the TomTom Go app, as there is now no key differentiators putting TomTom software as more usable than Google Maps or Garmin SatNav devices. Think about this. I actually have the BMW Navigator, and I still chose TomTom because I value the above features over the available telemetry data and multicontroller of my BMW. Now, I might as well go free with Google Maps, and if this current software is the same direction my TomTom Rider 550 will eventually go to, then I may as well revert to my Navigator.

[If you're wondering why I use both my SatNav and my cellular phone app on my motorcycle: I do a lot of long distance back country riding, and as such I like to have one in birds eye view to see upcoming curves, and the other in north up view zoomed out so I have a sense of orientation of where I am in my journey.]

Last two screenshots courtesy of Tech is Tech on YouTube 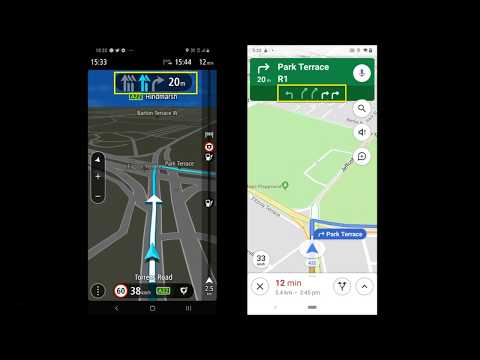 since I don't have the older app to take screenshots from anymore.
2